I had already decided not to go to Craft Beer Helsinki (CBH) this year, since last year's memories were so beautiful, since I have a bunch of beer to be destroyed in the cabinet after Sober June and since - as every reader of this blog should know already - beer festivals are places not to go to because of A and B. However, a trustworthy old friend of mine, known as the Other Idiot, ruined my plan by offering his company for the event and a sofa to sleep on afterwards. You can't say no to that kind of kindness, can you?

So, off I went. The breweries of CBH came both from Finland and abroad - biggest names being BrewDog, Founders, Stone and - for the first time in the two-year history of the festival - Omnipollo. There were many craft breweries from Estonia, Poland and surprisingly Spain present, too. Since I've had some pretty good experiences with each of these countries, my plan was to push the big ones aside and focus on these three countries. And have some good Finnish craft beer on the side.

This was the second CBH ever, organized again by RH Events Oy, which was formed in 2016 by Helsinki-based gypsy brewery Humalove and event-organizing running school Runner's High. This year the event was held 6 - 8 July at the usual place, Rautatientori in Helsinki. There were 30 breweries and altogether around 250 beers present during the event. Entry to the festival with an ordinary beer glass cost 4 euros (with a tulip 5 euros). As the currency they used value loaded to a Seamchip card - like last year - that had a returnable deposit of 2 euros. The complete beer lists were available at Hanassa.fi site three days prior the first day of CBH - excellent work from the breweries and the organizers!

We - me and the Other Idiot - were at the scene on Friday at 12.30 p.m, half an hour after the opening. There was basically no queues, so we got straight to the counter and inside the area. No price lists were available beforehand, so that was checked first. The normal rate seemed to be 3-4 € for 15 cl and 5-7 € for 30 cl of beer but there was a lot of variation: the highest price for 15 cl seemed to be 6 € (Lehe Singularity, 18 %). Since we got excellent company on our table and good discussion, interrupted too many times by my stupid anecdotes, we spent more time in the festival we had planned. Despite the growing crowd from 4 p.m. on we got out as late as a little after 10 p.m., since we started to feel hungry and tired and didn't want to load more currency to the Seamchip.


This time we had to grab something to eat early, because we had missed lunch. Texas BBQ's pulled pork burger with BBQ sauce, friend onions and mayo tasted good and filled the stomach nicely for the upcoming beer challenge. Of course there was some festival extra in the price (10 €) but hey, it was a beer festival. Thanks to Keikyklubi for the recommendation.

The highlight of my festival - that will later be the lowpoint of a big bunch of other people's day - was being interviewed by a talented Finnish beer blogger from Bönthöö Bönthöö, an all-around guy of craft beer. We discussed shortly about beer, blogging and beer festivals and had a small dark beer tasting in front of the camera. Because the videos will be published later, I won't tell more here. I haven't shown my face in the blog or because of beer before, so this was stepping "out from the pint" for me. Probably my face will show up in the blog later, so all two and a half readers can truly scare the hell out of their kids or at least the annoying neighbour's stupid kids. In the end, I think the interview went well, mostly because of the professional grip of their crew. Big thanks and eternal hails! The link to the interview will be here as soon as it's published.

The beers - which will be remembered and which I'm trying to forget?

Let's start from the bottom, since the worst beer of my festival was easy to name. Sadly, it was the only one I took a big 30 cl doze of, when I got rid of the last 5 € on my card. Also sadly, the brewery didn't have either of my listed beers on tap on the moment, so I basically filled my glass by lottery. Well, this lot didn't win. The beer's colour started suspicions that I had picked a special sour ale - and I felt plain stupid. Indeed, there was a lot of sharp tartness and sourness of sour berries - more sourness than the used berries, blackcurrant and blackberries, naturally have. Then there was more tart and sour, sour and tart but nothing else. The whole party on our table tasted the stuff and judged it to "be an unbeer", "have something seriously wrong with it" and "belong to live in the sewer".


The diploma of the Skitbit brew in Craft Beer Helsinki 2017 goes to...
Tanker / Hiisi Silly Juice. If you see it, don't order it and never drink it. Just run. 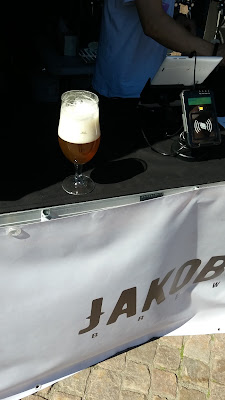 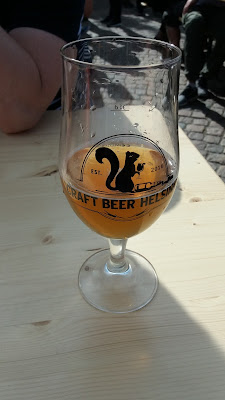 Some short notes from the brews that were allright or good but didn't reach the top spots: 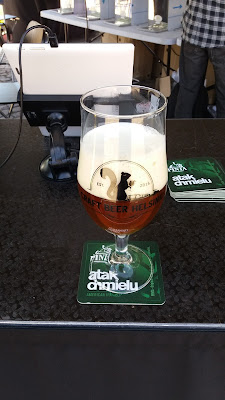 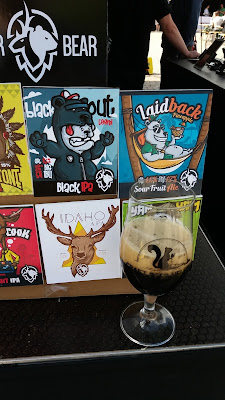 Then to the better end of the brews. I had couple of Belgian-style strong ales or quadruples or something close to that style in the festival. Both went to the top 5 but not quite to the podium. 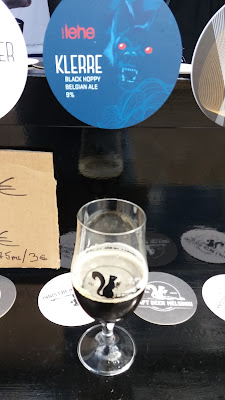 According to the head brewer and owner Tarmo Tali, Lehe Klerre doesn't fit to the quadrupel or any other beer style, since Belgian yeast, candy sugar and lots of hops are used brewing the beer. The brewery describes it as a black hoppy Belgian ale. Aroma has caramel, chocolate and alcohol. Taste gives heavy and thick malts, gentle sweetness and even elements of red wine ending with dry and strong malty bitterness. Unique, thick and tasty. 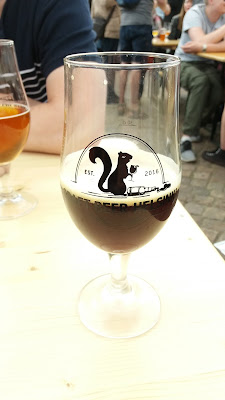 Bidassoa Nexus is described as a Belgian dark strong ale by the brewery and classified as a quadrupel. Nevertheless, aroma has sweet spices, fruits and some sourness. Taste gives sweet spices, raisins and malts with decent carbonation in the start, and it ends with sweet, malty and spicy aftertaste. Rich, spicy and good but not unforgettable.

The podium places were conquered by one style that was - surprise, surprise - Imperial Stout. 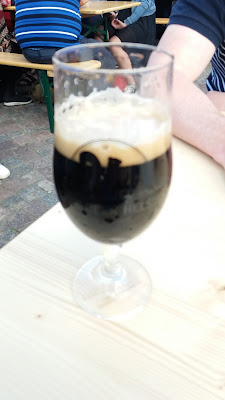 The bronze medal goes to Käbliku Penumbra Port Wine BA. By accident, I got a full doze instead of a half that I ordered - got the other half for free - but I wasn't offended. I've drank the basic version of Penumbra recently and liked it a lot, so there were high expectations. Aroma has wine, grapes and moderate roast. Taste begins with roasted malts getting mixed to port wine, coffee and dark chocolate. Aftertaste is fruity and roasty. Fine barrel-aged version that's not over-dominated by the barrel, even though I like the ordinary version a bit more.

The first place is shared by two brews - just couldn't put them in order. 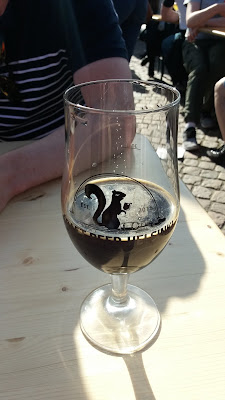 Orava / Cool Head Orwellian Nightmare is a filtered no-screwing-around (= no tricks nor gimmicks?) Imperial Stout by Orava Brewing, a gypsy brewery from Turku, brewed at Cool Head Brew in Tuusula. Aroma has chocolate, espresso, roasted malts and some spices. Taste gives strong flavours of dark chocolate and black coffee with a moderate smooth roast. Aftertaste has nutty and oaky dry kick. Remarkable show of recipe and brewing skills from a newcomer brewer - this is their 2nd commercial brew.


Overall the festival felt well organized. The organizers had clearly learned from the mistakes of last year. There were no problems with queues or the paying system while I was in the area. The only queues spotted were to the Omnipollo booth and, after the area got crowded, to the Seamchip loading booth inside the area. The first one, queue to get Omnipollo beers, got me wondering the reason for the hype. According to some Finnish beer blogs, there had been even longer queues to Omnipollo booth in Tallinn Craft Beer Weekend in the beginning of May. In Craft Beer Helsinki, according to some festival visitors, the booth ran out of some most craved beers on Thursday, the first day, and some other beers on Friday, the second day. Most of their hyped beers seem to be gimmick dessert beers that have flavours that I simply don't want to taste in a beer, even though I like chocolate, ice cream, mud cakes, peanut butter etc. Possibly some serious adults can set their inner child free only in beer festivals, where they allow themselves to have as much dessert as they want, because outside the fence it's completely forbidden. I don't know - anyway it seems stupid to stand in queue for average tricky beers when there are good quick and slow ones available straight away.

To compensate the fact that I had none beers with a huge wow factor in CBH, I was lucky to have the best company of the event - both in my home table and in the interview. Next year, the presence of the right kind of people in the event will be more crucial than the breweries and the beers available. That's what beer festivals like CBH are really about, right?

After a long break, heard this song one day. "I don't know what you do / but you do it well / I'm under your spell." Fits exactly to my thoughts, when I left for this beer festival, though I knew I shouldn't have.

From the 2008 album Rockferry, the song was written by Aimée Ann Duffy and Steve Booker.
Ölmönger at 8:57 PM
Share
‹
›
Home
View web version